Home / Blog / How are The Faucets Made? – Full Guide
Back

How are The Faucets Made? – Full Guide

This post will walk you through how a faucet is made in details including the backgrounds, history, materials and the whole process of making faucet.

A faucet is a device that delivers water from a piping system. It can consist of the following parts: spigot, handle, lift lever, spool, aerator, mixing chamber and inlet. When the handle is opened, the valve opens and controls the regulation of water flow in any water or temperature condition. Faucet bodies are usually made of brass, although die-cast zinc and chrome-plated plastic are also used.

Most residential faucets are single or dual control cartridge faucets. Some single-control types use a metal or plastic core that operates vertically. Others use a metal ball with a spring-loaded rubber seal embedded in the faucet body. Less expensive dual-control faucets contain a nylon cartridge with a rubber seal. Some faucets have a ceramic disc spool for greater durability.

Faucets must comply with water conservation laws. In the United States, bath faucets are now limited to 2 gallons (7.6 liters) of water per minute, while tub and shower faucets are limited to 2.5 gallons (9.5 liters).

Faucets run for an average of eight minutes per day, according to a study completed in 1999 by the American Water Works Association Research Foundation, which was based on water use data collected from 1,188 residences. Of the daily per capita water use, 69 gallons (261 liters) were used indoors and 11 gallons (41.6 liters) were used at the faucet, which ranked third. In homes with water-saving fixtures, faucet water use rose to second place at 11 gallons (41.6 liters) pcd. Faucet use is closely related to household size. The addition of teenagers and adults increased water use. Tap use was also negatively correlated with the number of people working outside the home, and households with automatic dishwashers used less water.

Plumbing systems have existed since ancient times. Around 1700 B.C., Minoan palaces on Crete featured terracotta plumbing that provided water for fountains and taps of marble, gold and silver. Lead pipe systems and personal baths also existed during the Roman period from 1000 B.C. to 476 A.D. Roman public baths also featured silver faucets, along with other marble and gold fixtures. By the fourth century AD, Rome had 11 public baths, 1,352 public fountains and cisterns, and 856 private baths.

Since that time, the plumbing system has changed dramatically, including the faucets. For many years, faucets had two handles, one for cold water and one for hot water. It wasn’t until 1937 that this design changed. That year, a college student named Al Moen, who lived in Seattle, Washington, turned on the faucet to wash his hands, and because the water was so hot, he burned his hands. This set off an idea in Al Moen’s mind for a single-handle faucet.

Moen’s first design was a two-valve faucet with one cam to control two valves. It was rejected by a major fixture manufacturer because the faucet was unusable, and Moen switched to a cylindrical design. From this experience, he was determined to create a faucet that used a piston action to give the user water at the desired temperature. between 1940 and 1945, he designed several faucets, eventually selling the first single-handle mixing faucet to a local plumbing supplier in San Francisco in late 1947. By 1959, Moen single-lever faucets were in hundreds of thousands of homes in the United States and sold in some 55 countries around the world. Today, single-lever faucets are so popular that they can be found in more than 40 percent of U.S. homes. 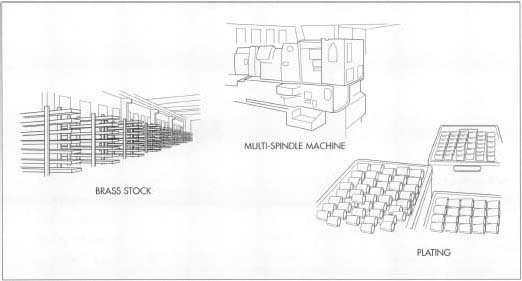 Moen came up with several other inventions during his lifetime, including the replaceable spool (eliminating the washer in the faucet), the screen aerator, the push-button shower valve diverter, the rotary spray head, the pressure-balancing shower valve and the flow-control aerator. But Moen wasn’t the only one concerned with faucet improvements. 1945 saw Landis H. Perry design the first ball valve for faucets. Its purpose was to provide a combined flow and mixing control with a simple and effective way to seal the valve element. The design also allowed for easy maintenance.

In 1952, Perry’s ball valve was patented. Shortly thereafter, Alex Manoogian purchased the rights to the patent and introduced the first Delta faucet in 1954. The Delta Single Handle Faucet was the first faucet to use the ball valve design, and it proved to be very successful. By 1958, only four years after the product was introduced, Delta sales had reached $1 million.

About 20 years later, Wolvering Brass was awarded a patent for a ceramic disc for water control. Unlike cartridges that use rubber in the water circuit, the ceramic discs are ground and polished so that their flatness can only be measured with light tape. Due to their high abrasion resistance, these discs last longer and provide more precise control. These discs or valves are now in widespread use.

Other recent innovations include built-in filter cartridges for reducing chlorine, lead and cysts; built-in pull-out spray heads; faucets designed for people with disabilities; and electronic faucets. The latter was introduced in the early 1980s for protection and sanitation purposes. These faucets are equipped with infrared beams that are disrupted when a person places his or her hand under the faucet, which triggers the water to turn on. In recent years, battery-operated electronic faucets have also become available.

Brass, an alloy of copper and zinc, is the most widely used faucet material because it resists soft water corrosion and hard water calcification. It usually contains some alloying elements, such as bismuth, making it easier to work with. The brass received is a bar of 0.13-2 inches (0.33-5 cm) in diameter, depending on the size of the faucet. Most of the other parts that make up the faucet are made of other metals or ceramics and are received as finished parts from other manufacturers.

Faucets are available in a variety of styles, colors and finishes to meet the various needs of consumers. Ergonomic designs may involve longer spout lengths and easier-to-operate handles. The shape of the faucet and its finish will affect the manufacturing process. Some designs will be more difficult to machine or forge than others. Different finishing processes may be used to achieve a different look.

For homeowners, special finishes are available, including brushed nickel, polished nickel, satin black, gold, platinum and a variety of colors. Consumers can also now customize the look of their faucets by combining more than one finish. Warranties are longer and more features are available. prices for consumers ranged from $40 all the way up to $500 in the spring of 2000.

The manufacturing process of faucets has become highly automated, with computers controlling most of the machines. As a result, productivity and efficiency have increased over the years. The basic process includes forming the body of the faucet (sometimes including the spout if it does not need to be rotated), applying the finish and then assembling the individual parts, followed by inspection and packaging. The faucet industry is also affected by environmental regulations, which require the development of special processes.

Once the parts are assembled, they are pressure tested.

After the first part is machined, it is checked against the blueprints to make sure it matches all dimensions. A “go-go” gauge is used to ensure that the internal and external threads match. Since machining is automated, a random sample is checked for more critical dimensions. Prior to plating, parts were visually inspected for surface defects, which were removed by grinding. After final assembly, each faucet is air pressure tested for leaks and tested for durability.

Faucets must also pass several environmental regulations. The National Sanitation Foundation’s Regulation 61, which limits contaminants in drinking water (lIppb [parts per billion] of lead in end-use equipment water), applies to kitchen faucets, lavatory faucets and drinking fountains. Other laws are more stringent – California’s Proposition 65 limits the allowable lead content of consumer faucets to 5 ppb. There are also a number of plumbing regulations that need to be addressed, and these may vary from city to city. Many cities now require rust-resistant bathtubs and shower faucets.

To obtain NSF certification for a faucet, the manufacturer first submits a list of all materials, including the formulations used in the product. NSF toxicologists then review the material formulations to identify potential contaminants that could be extracted from the faucet and enter drinking water. NSF then inspects the manufacturing facility to verify material formulations, material suppliers, quality control procedures and operations. Random product samples are taken and tested in the NSF laboratory.

Faucets are subjected to a rigorous three-week testing period in which they are filled with the extracted water specified in the standard. Selected water samples are analyzed for contaminants. NSF toxicologists compare contaminant levels to the maximum allowable levels specified in ANSI/NSF Standard 61. If the product meets the requirements of the standard for all contaminant levels, the product is certified. Only then is the manufacturer allowed to display the NSF logo on the product to indicate NSF certification. In order to obtain certification, some manufacturers have had to completely modify their manufacturing processes, such as switching to purer brass materials or adding finishing flushing processes.

Scrap metal from the machining or forging process is recycled. Finishing processes may produce scrap that must be disposed of or minimized by recycling. Since most processes are automated, waste is reduced to a minimum.

Faucet manufacturers will continue to add value and quality to meet growing consumer demand. The number of styles and range of prices will expand, and high-end products will become more popular as remodeling intensifies. Europe will continue to stay ahead of the U.S. in terms of design, offering more contemporary styles and colors. While the overall manufacturing process will remain the same, more automation will be used.

New finishes produced using PVD technology will become more widely available as consumers recognize the style and durability these finishes can provide. This may require manufacturers to improve the economics of the process, as it is more expensive than chrome plating. The popularity of filtration will expand to faucets as consumers recognize the benefits of built-in filters. Eventually, these types of faucets will become the norm.

The trend toward battery-operated electronic faucets is expected to continue, and the commercial market should expand as prices decline overall. Technology will continue to improve, making these faucets easier to maintain and improving operation due to fiber optics. With this improvement in technology and price, electronic faucets will soon even enter the residential market.